Decoys became commonplace in the s, but their usage is ancient. In , two miners hired to harvest bat guano from Lovelock Cave in Nevada uncovered Native American artifacts, including 11 decoys dating back 2, years. Decoys are used by hunters to lure ducks within shotgun range as those ducks look to flock up with others. In Maine, duck season takes place in the fall, and in some cases into early winter. Season dates are set after the establishment of a federal framework that state officials follow for the migratory birds. The heyday of wood-carved decoys ranged from the s until the s.

Serious collecting began in the s, but exploded in the early s. Collectors were as interested in meeting and getting to know the carvers as they were owning the pieces. In New England, another big name in carving is A. Elmer Crowell of East Harwich, Mass.

Unlike Holmes, Wilson was very prolific, adjusting his style throughout his life. Superior hollow pine blue-winged teal drake from the Old Saybrook, CT factory, c. The keel is missing. Otherwise, mint original condition. There's a small chip under one side of the bill and there may have been a light coat of varnish applied after production.

Measures 12" in length. Excellent all original paint and condition with slight wear on both sides. Measures just over 12" in length. This great pair are ca. Mint condition green-winged teal hen from the Pt. The hen has a split on the left side where it appears the in factory fill has dried. Other than that no significant issues. The drake has a number of shot scares.

Tips of the Trade

Both are missing the weights. Small body model measuring 14" in length.

The bottom weight has been removed and there's an in the making knot on the right side as shown in the picture. Outstanding original paint that appears to be protected by a thin old coat of varnish. Measures 14" in length. The bottom weight is missing. Honest and all original rigmate pair of standard grade, glass-eye model broadbills by the Mason Decoy Co. Both have the collectible spatulate bills, average wear and missing neck filler. Both have a unique burned in brand in the shape of an arrow on the left sides.

The Westbrook ice disc isn’t alone. It has a smaller cousin up in northern Maine.

The hen retains the bottom weight. The drake is missing the bottom weight. Excellent original paint and condition on this Mason Decoy Company Detroit, MI , early challenge grade broadbill drake ca. Measures just over 14" in length. There is some in use wear. Neck filler appears to be replaced. There may be some paint strengthening on the left side of the face.

This great example is ca.


These wonderful examples are in unrigged and unused condition. Each measures approximately Nice factory stamp on both.

This wonderful example is in unrigged and unused condition. By far the nicest Wildfowler wigeon I've ever offered. By far the nicest Wildfowler mallard I've ever offered. There is some paint loss at the neck seam on the right side and a couple of small dents in the back. Other than that, this one is mint. Three different head postures create a compelling display. Light wear on the edges. Other than that, these are nearly mint. Just a few scuff marks on this nearly mint, unused, balsa body, bluebill drake from the Point Pleasant factory of the Wildfowler Deoy Company. Mint wigeon drake from the Bohemia, NY factory of the wildfowler decoy company.

Constructed of balsa for the body and pine head. The keel has been removed. This example is in exquisite working repaint by a very talented hand unknown to me. Mint condition, solid pine green-winged teal drake from the Wildfowler Decoy Company of Pt. Measures just under 12" in length. Excellent, dry original paint on Superior grade rig mate mallard pair from the J.

Age split on the right side of the drakes head. Really nice paint on this pintail drake from the Scott Cork Decoy Co. This is the round bottom model with plastic bill and black glass eyes.

There is a tear to the canvas on the right side and back of the neck as pictured. Rare, early wooden bill models. Original paint with a thin over coat of varnish. The head on the drake pictured in the front was torn and reattached.

The ink stamp on the bottom is still partially visible. 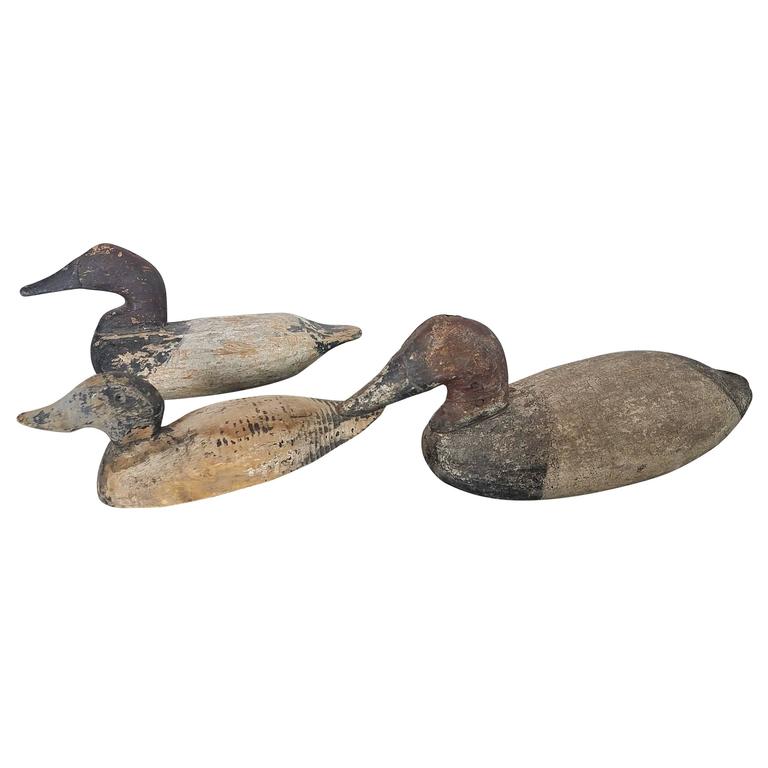 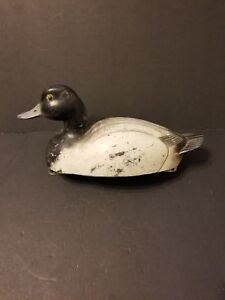